Debelo page for any kind of Tewahedo Christian prayer

And on this day also was crucified our Lord and God and Redeemer, Jesus Christ, to Whom praise in the body is due because of the salvation of the world. The sun became dark when it saw its Creator crucified by His own will, and that which should have been visible covered itself over. And the period of darkness lasted from the sixth to the ninth hour, and in that time our Lord bowed His head by His own free will, and delivered up His understanding and rational soul which He had received from our Lady, the Virgin Mary, and that soul was separated from its body. And it went into Sheol without separation from the Godhead, even as Saint Peter the apostle saith, He was dead in the body and alive in the spirit. And at that same time His body was hung upon the wood of the Cross, without separation from the Godhead. Similarly His soul descended into Sheol, like a released prisoner, and it had one nature and was without separation from the Godhead. And He was exalted high above the heavens, sitting with the Father and the Holy Spirit. Salutation to Thy Passion, O God the King. Salutation to Thy Crucifixion on the Cross. Salutation to the going forth of Thy Soul from Thy Body.

On this day are commemorated the glorious angel Raphael the archangel, the third of the vigilant, holy and heavenly archangels; and the dedication of his church, which was built to him on an island outside the city of Alexandria in the days of Saint Theophilus the Archbishop; and the miracle which was made manifest therein, and took place thus.

A certain rich woman from the city of Rome came to Saint Theophilus the Archbishop, and with her were her son and a picture of the glorious Archangel Raphael, and much money, which she had inherited from her parents. And she cleared away the heap of rubbish, which was in front of the archbishop's house, and there appeared from beneath it a treasure of gold, even as we have written [in the section for] the eighteenth day of Tekemt.

And this church continued to exist until the time when the Muslims reigned, and then it was destroyed, and the whale moved, and the sea flowed back again and drowned many people who dwelt in that place. This story was told by John, Archbishop of the city of Constantinople, to Honorius, the righteous emperor. And he said unto him, "Know, O emperor, that we were sailing in a ship to come to thee, and as we were going along we saw a church, on the island, on the day preceding the Sabbath, and we came into port, so that we might received the Holy Mysteries on the First Day of the week. And we found a little monastery by the side of the church, with brethren and monks therein. And, by the commandment of God, we went to them, and we said unto them, 'O brethren, if ye have with you an old manuscript treating of the days of the ancients, give it to us so that we may comfort ourselves therewith.

And they answered and said unto me, 'Behold, we have many manuscripts in the sanctuary, but we do not know how to translate them. And I said unto them, 'Bring them here that I may see them'. And when they brought them to me, I searched through them, and I found that they treated of the mighty deeds and miracles which our Lord Jesus Christ had performed before His disciples, and also of the beginning of the heavens and the earth, and [they went on] to the end of this world. And as I was examining these manuscripts, I found a manuscript which was written by our fathers, the holy Apostles, and which treated of the appointment of the Seven Archangels, and it said: 'When our Lord Jesus Christ was on the Mount of Olives with His disciples, He revealed to them the mystery of the Godhead.

And the Apostles asked Him, saying, 'O our Lord and God, we beseech and entreat Thee to tell us about the glory of the honorable angel Raphael, and what day Thou didst appoint him, and in what month, and whether he is the equal of his fellow archangels, so that we may preach him in the world, and that men may celebrate a festival in his honor as they celebrate festivals in honor of his fellow archangels, and that men may pray to him in the time of their sorrow and tribulation, so that they may find grace and compassion with Thee, and his intercession. And straightway our Lord Jesus Christ commanded, and the seven, and the three archangels, came from the third heaven, Michael, and Gabriel and Raphael with great joy, and they bowed down before our Lord Christ: and our Lord said unto the angel Raphael, 'Tell the Apostles thy name so that they may know thy great honor', Now the Archangel Raphael, a sincere (?) angel, is the third of the archangels, and Michael the archangel is the first of all the angels; and his name [meaneth] the 'compassionate'.

And Gabriel is the second archangel, and his name [meaneth] 'God and man', and it was he who was sent to our holy Lady, the Virgin Mary, to announce the birth of our Lord Jesus Christ from her. And Raphael said, "I make hearts to rejoice, and I am sincere, and good, and merciful to sinners, against whom I never lay information concerning their sins before God; I speak only of my power to save, and my sincerity, and my love for men. I send angels with the souls of sinners, and I treat them with long-suffering until at length they repent of their sins, and forsake their transgressions.

I am Raphael under whose hands are kept the treasure houses of the heavens, and I open them and shut them according as God commandeth me. And if any man shall do a good deed to another man, who is in tribulation upon earth, for my name's sake, or shall write a book about my office, or shall remember any of the poor in my name, or shall offer up an offering or incense on the day of my commemoration, which is the third day of Paguemen, whereon God appointed me, and crowned me with the office of the angels, I will bear them and transport them on the chariot of light, until they enter the heavenly Jerusalem.

And I will place in their souls scented branches with an exceedingly sweet odor, the like of which shall never be found upon the earth. Ask of me, O chosen Apostles, at all times so that I may protect you until ye stand before God. And preach ye unto all men in all the world that they must celebrate my commemoration, and I will make intercession with God on their behalf, and I will deliver them from their tribulation, and they shall never see punishment". And having said these words Raphael bowed low to the Lord. And this glorious angel Raphael, the archangel, hath performed many miracles, and it is meet that we should celebrate his commemoration at all times, for he maketh intercession with God on our behalf. Salutation to Raphael. 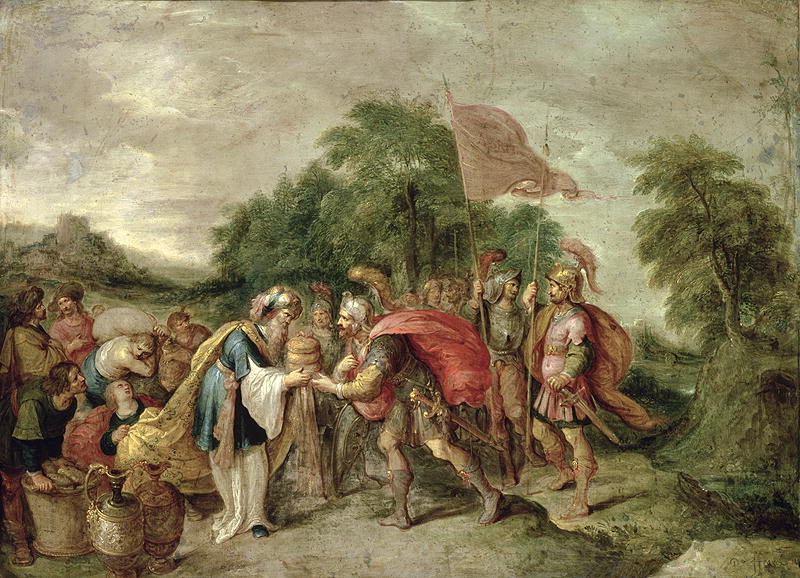 And on this day is celebrated the death of Melchisedek. This man was the son of Kainan, the son of Shem. And when he was fifteen years of age God commanded Noah to send Shem his son with the body of our Father Adam, and to lay it in the middle of the earth, which is called "Keranyo" (Place of Skull); and he informed him that the Savior of the world would come, and that they would sacrifice Him there, and that He would redeem Adam by His Blood. And Shem and Melchisedek took the body of Adam from the house of his father in secret, and he went there, and the angel of God guided them; and Melchisedek was appointed priest. And he took twelve stones and offered up an offering upon them, with bread and wine which came down to him from heaven, and which revealed the mystery of the new Law. And the angels used to bring food unto him from heaven, and his apparel consisted of a hide, and a hide girdle, and he continued to minister before the body of our father Adam. And when Abraham returned from the war, and had vanquished the kings, he offered him bread and wine, and Abraham gave him tithes of all his possessions, and he was appointed priest and king of Salem. Salutation to Melchisedek.

And on this day also died Serapion of Landun. This saint was learned in the Books of the Church, and in the interpretation of the same, and he renounced all the possessions of this world. And then he went and departed into the country of the pagans, and sold himself for twenty dinars, and he took care of his dinars. He ate nothing but bread and water, and he used to pray to God to turn [the people] from their error; and then he made them all to believe in the Faith of Jesus Christ, and he taught them all the Law. And then he told them that he was an Egyptian free man, and that for love of them he had sold himself; and he gave them the money of his price to give to the poor. And he departed to another city, the people of which were called "Mankayaweyan", and he sold himself to them, and he served them until he made them to believe in the Faith of Christ. And then he went to Rome and lived and worked there, with fasting and prayer, until at length he died in peace; and signs and wonders appeared through his body. Salutation to Serapion.

And on this day also is celebrated the good, honorable, Orthodox and apostolic king Zara Yacob who died on 26th August 1468 after he had established ordinances and laws for the good behavior [of his people] in all the cities of his kingdom. Salutation to Zara Yacob, the preacher of the Faith of the Gospel. Zara Yacob was a zealous adorer of Saint Mariam and a philosopher of Maryology .Glory be to God Who is glorified in His Saints. Amen.